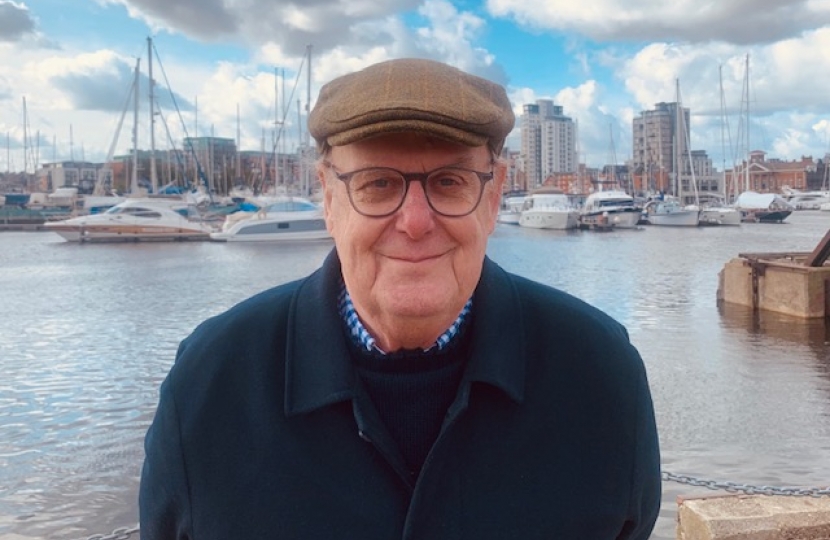 PLEASE VOTE FOR YOUR CONSERVATIVE CANDIDATE MIKE SCANES IN BOTH THE COUNTY AND BOROUGH ELECTIONS.

Mike has lived in Ipswich since he moved from Manchester in 1985.  Following his retirement from industry, he joined the NHS and worked for the Cancer Networks in East Anglia. He worked at Southend Hospital from 2013 until 2016 as a Urological Cancer Project Manager. He was part author of a guide for Carers of Cancer Patients published by a major cancer charity. He was a supporter of the Hospice Movement both locally and nationally. He was a member of the Patient and Public Involvement Forum for Suffolk Mental Health Trust.

He was widowed in 2004 and has two daughters who both live in Ipswich (one in Bridge Ward), and two grandchildren who attend local schools. “As a Grandad of school age children, I am aware of the dangers of speeding traffic and unsafe parking in the school safety zones and the roads in Ipswich in general. I will work with the police and schools to make access to schools safer.”

“Many of the roads in South West Ipswich are in an extremely poor states with many potholes. While there has been some resurfacing work in the area, there has been a deterioration over the last couple of years. If elected I will work with the County Council and press for more repair work in this area”.

Mike is concerned at the level of unsafe parking in Ipswich. The main problems are parking within the School Safety Zones, close to road junctions and parking on pavements and grass verges. He will work with the Police and County Council to crack down on antisocial parking by the introduction of more double yellow lines at junctions and close to schools. Mike supports the introduction of one-hour free parking in Ipswich centre which will help alleviate the inconsiderate parking in the residential areas.

His connection with the NHS means that he understands what families need from their local GP, dentists and hospital services. He will work with the CCG and Borough Council to establish a “Super Surgery” in South West Ipswich which will offer a full range of services in addition to GP surgeries.

There has been an unacceptable increase in burglaries and car crime over recent months. Mike will press for more police patrols and for street lighting throughout the night in the residential areas.

Following the announcement that Felixstowe and Harwich are to form a Freeport, urgent discussions are required to develop the Transport infrastructure of the region to accommodate the increased traffic. Suffolk and Norfolk are the only Counties in England that do not have a motorway.

This will include support for the proposed cycleway and footbridge across the river close to the locks.

Mike will work with all the relevant organisations to improve the environment in and around Ipswich, including regeneration of the town centre by offering support to small independent shops.