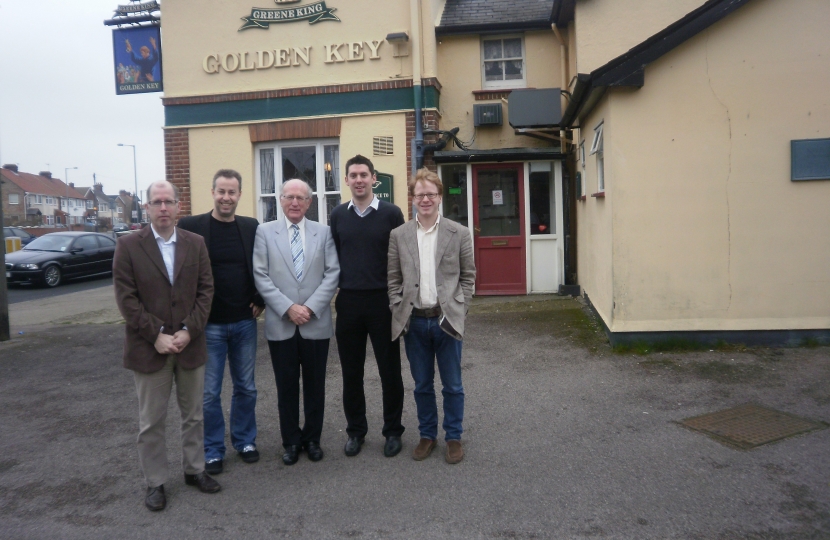 I’ve always been a good sport. I play hard, but whatever the result I will plant a smile on my dial and say ‘put it there’. This month, however, it has become clear to me that if you don’t have the numbers on the council, you can do and say whatever you like – the Labour administration win. Disheartening indeed, particularly when I know - and the town will inevitably learn to its cost - that whatever economic difficulties we face, the answers will never be provided by the left.

Fellow Conservative Councillor Russell Harsant’s funeral was held today at St Mary Le Tower Church in the centre of Ipswich. Members of Russell’s family, his friends, Councillors and Mayoral Party joined the congregation to provide a fitting tribute to a lovely man. The service included readings from his grandchildren and a warm testimonial from close friend Ben Gummer MP. He was a local man who cared about local people; a collection following the service for our own St Elizabeth Hospice demonstrated exactly that.

I am proud to be a member of the Governing Body at Broke Hall Primary School. It consistently demonstrates rigour across all areas relating to the proper management of the school. Central to the agenda at present is the need to attract another top-notch Head-teacher to the school for the start of September. We govern an ‘outstanding’ school, and whoever is appointed is going to need to support our superb staff to maintain and improve on that standard. An Ofsted inspection looms large on the horizon.

Ipswich Borough Council’s Labour Administration has put together a ‘Corporate Plan’ and their first Budget. This provided tonight’s Conservative Group meeting with better than average entertainment as we discussed how we would go about holding them to account. I left Group Leader Cllr Carnall to digest how Labour were relaxing the tight spending controls he presided over during our years in office, and concentrated instead on Labour’s spurious list of achievements over the last 9 months. My eagle eye could just read the words ‘Conservative Achievements’ scratched out from above most of them.

As Shadow Planning and Economic Development Portfolio holder, I find the Development Working Group meetings a useful way to be brought up-to-date with issues relating to Town Centre investment. I learnt, for example, that sales held up over the Christmas period – largely due to Sales, and that Mary Portas is all things to all towns. I do hope that Cllr Jones’ enthusiasm for new Town Teams doesn’t undermine the very well supported work being done by Ipswich Central. It appears that the question to be grappled with is how to bring on-line shopping into a social space. The answer may see High Street shopping completely transformed over the next few years.

Cultural partners and stakeholders were invited to attend the launch of ‘Access All Areas’ tonight, at the Town Hall. That included me. The evening was an opportunity for networking - food and drink was provided by our brand new Waitrose and ICR took care of the music. The real focus for the evening was to discuss ideas about potential future uses for the Town Hall and Corn Exchange. These are wonderful spaces and, at present, they are under-used. Any thoughts?

Tony McNulty was a Minister of State in the Home Office in the last Labour government, so it might come as something of a surprise when I tell you that I spent this evening listening to a lecture from him on the subject of Media in Politics. But then it may not. If there was ever a government that made the most of the media to get out its message, it was the Blair government. The lecture was interesting, although I was strangely left with the feeling that I had heard it all before. How Nixon was defeated by Kennedy because he ‘didn’t do make-up’. How Clegg became the nation’s ‘political centrefold for a day’ by looking into the camera during live debates. Not giving interviews when you’re in ‘a bit of a mood’. All common knowledge surely.

A strong field of candidates were interviewed for the role of Head-teacher at Broke Hall Primary School. The interviews were carried out over two days and required candidates to address an assembly, meet with the staff, give a presentation and, perhaps most daunting of all, answer questions from a panel of pupils. Our search for a head-teacher was even filmed and shown on BBC’s The One Show! In the end the governing body were in total agreement about our chosen candidate, who we all felt had the experience and commitment to add significantly to the school’s development.

Cllr Carnall provided the Conservative Group with details about an amendment to the budget, he would be presenting on Wednesday at full council. His carefully costed amendment would mean a 3% reduction in council tax for local residents. We also discussed the questions we were planning to put to the various Portfolio Holders. I have a question ready for Cllr Jones about her part in Labour’s Golden Keys debacle. Conservatives have a clear line about what should happen to the Golden Keys Pub; let local people decide. Labour have a clear line about it too; no Tesco! As a second Greene King application wings its way toward the Labour dominated planning committee, anyone like a little wager about what will happen next?

Sadly, Cllr Carnall’s amendment to secure a 3% reduction in council tax was given about as much consideration as Cllr McDonald’s nomination for parliamentary candidate. I refer you back to my opening remarks about ‘having the numbers’. Cllr Ellesmere, supported by his party ‘Yes Men’ mocked, jeered and generally fell about as if cost cutting was Greek to them, then raised their hands ‘Against’ the amendment, before voting in their own budget in full. I ran into a brick wall of my own. Cllr Jones refused to admit that being a Labour and Co-operative Councillor and a member of the Planning Committee when presiding over the future of the Golden Keys Pub was scandalous, and Cllr Knowles refused to re-instate an important Bixley polling station. Oh well, at least the daffs are out.