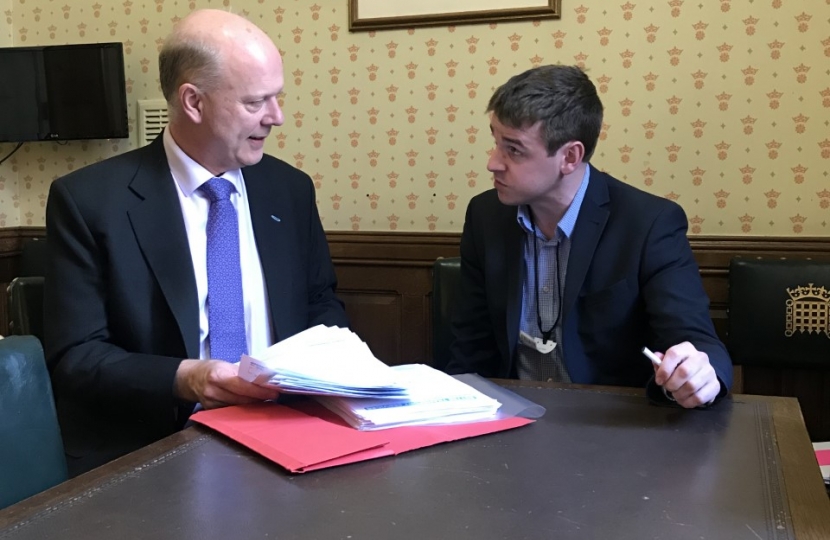 Tom Hunt, the Conservatives' candidate to be the next MP for Ipswich, met the Rt Hon Chris Grayling to raise residents' concerns over the state of transport in the town.

Tom writes: "I was glad to be able to get the responses to my transport survey in front of the Secretary of State for Transport yesterday. In total 83% of Ipswich residents who responded to my survey back a northern bypass.

"I was keen to make the arguments to the Transport Secretary. I was also keen to stress the importance of there being a solution in the short term to prevent frequent closures of the Orwell Bridge. The Secretary of State said he's instructed Highways England to carry out a study to look at what can be done and he said this should be completed over the next couple of months.

"I also called for a number of significant key investments to upgrade rail infrastructure across East Anglia. It will only be with these interventions that we can ensure that the new Ipswich in 60 service can become far more frequent and can operate at peak times. The cost of rail fares was also raised.

"On Monday the Rail Minister visited Ipswich station and now I've been able to get the transport survey returns in front of the Secretary of State for Transport. I'm very glad the Government's door is so open. I will keep on pushing to ensure that the views of Ipswich residents are heard loud and clear by Government."

Update from the Prime Minister on our fight against the coronavirus

The Prime Minister's speech on 28th May 2020, about the country's fight against coronavirus