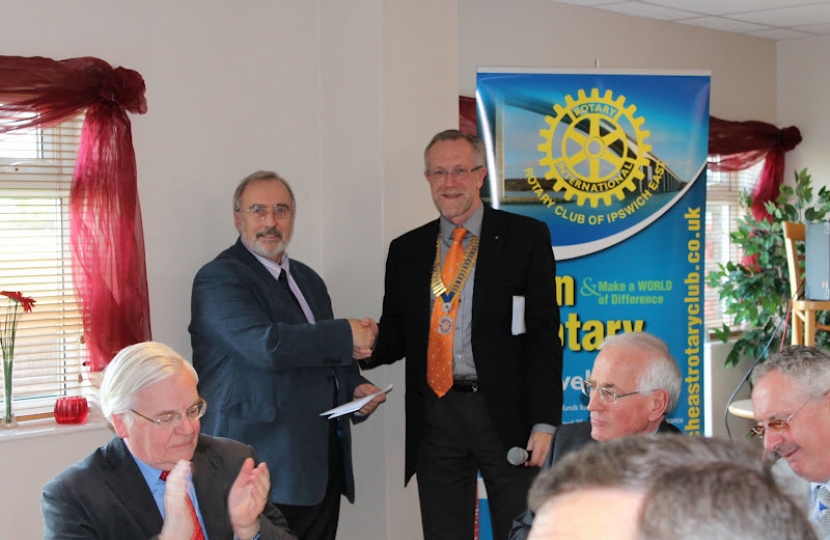 Liz Harsant is a very proud member of the Ipswich East Rotary Club which last week announced the new route for this year’s 35th Orwell Walk on Sunday 24th June. The Orwell Walk, which began in 1977 with just a couple of hundred walkers, is now the most successful fundraising campaign for Ipswich East Rotary Club, to date raising more than £1.3m for local charities and good causes. Last year’s walk was attended by a massive 2,000 people, all raising money for their chosen charities. Last week the donations collected by the Club from the walkers were distributed to local charities at a formal handover luncheon hosted by the Rotary club.

This year’s route has changed due to the shock closure last year of Amberfield School which had been used as the start and finish to the Walk. Therefore this year, people are asked to make their way instead to Gainsborough Sports Club where there will be ample free parking and refreshments at either end of the new 2012 route. The club is also celebrating 35 years of the Orwell Walk by recently launching a brand new website which has full details of the new route, this year’s walk Sponsor – Healthy Ambitions Suffolk and also new for 2012 the opportunity to register for the walk on line via www.ipswicheastrotaryclub.co.uk

Representatives from the following charities attended our lunch to collect their cheques:

Hearing Dogs for the Deaf accepted by Malcolm Taylor