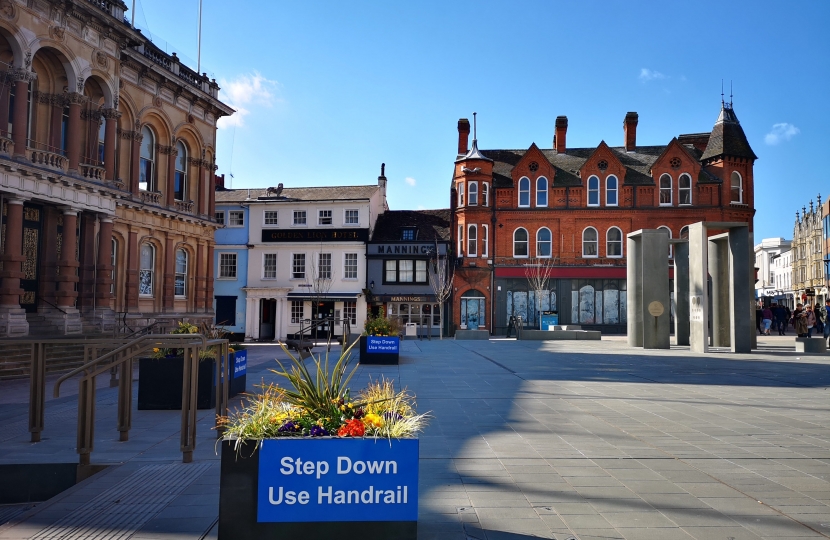 The Opposition Conservative Group requested a meeting with Russell Williams, Chief Exec of IBC on 19th May raising concern that no information had been released regarding the independent safety review of the Cornhill works. This meeting was proceeded by a member of a Disability Charity contacting the Group Leader after a meeting with Senior Officers of the Council regarding the Cornhill.

Group Leader Ian Fisher stated, “We were very conscious that it was commissioned in January and that Cllr Ellesmere had promised, in answer to our questioning at a Council meeting, that any safety recommendations would have been complied with immediately. We wanted to ensure that it was not brushed under the carpet. I was also shocked to hear from a Disability Support Group that they had already met with the Council who had agreed with them a list of improvements that were needed for the Cornhill.”

The meeting took place on 29th May and the Chief Executive confirmed that the report noted that the Cornhill met the safety standards but revealed that the standards had been updated during the works and only the original rules were adhered to.  The Council should have been aware of the changes, they have a responsibility to us all to ensure the safety of the very people they are there to serve.

Cllr Fisher raised concerns that the final design of the Cornhill was strikingly different to that presented to the Council before the work commenced. After the initial designs were presented it was announced in a restricted session of The Council Executive that costs had over-run and £350k of what were termed ‘Value Engineering’ savings had to be made. The Conservative Group calls on the Council to reveal completely what savings were made to ensure that safety was not sacrificed for cost savings. No satisfactory answer was given to this.

When questioned Mr Williams denied any knowledge of the recent meeting between Martyn Fulcher – Head of Development and Stuart Oxborrow – Cornhill Project Manager and local Disability Groups. The Conservative Group has been told that it was agreed that work was needed and would be completed.

Mr Williams went on to promise Cllr Fisher that he would see the full report prior to the press release but this never happened – what is the reason for this?

The Conservative Group has questioned this project at every opportunity – we were ignored when we asked for an independent safety review in November after the initial accidents and it took the unfortunate death of Mr. Stowe to push this woeful administration into action.

Questions that must be answered;

Was it a coincidence that the report was mysteriously ready after we pushed for an update?

Why isn’t the work being completed immediately as promised by the Leader of the Council?

Were Disability Groups ignored in the initial consultation?

What designs did go out for Consultation?

Was safety ignored in the rush to save £350k?

Why were so many design mistakes made?

Who is really at fault for this?

We were promised the plinths would look better after polishing – I don’t believe anybody knew this had taken place but now IBC are stating the plinths have been polished already and that it made no improvement. When did this take place? Why was it secret? If IBC never paid for the Plinths, it suggests they were unhappy upon delivery – if so, why were the plinths installed?

Cllr Fisher said, “The failure of the Chief Executive to answer any of my questions and the keeping secret of the report we were promised would be made public add to my worry that something is being covered up.

A lot of public money has been spent and the level of problems is just not acceptable. A project of this size should not have to have a safety review 3 months after opening. It is an embarrassment for Ipswich and heads need to roll, but not until the truth is heard. I also do find it extremely surprising that the Leader of the Council, Cllr Ellesmere, has let Mr Williams deliver the bad news to the press – he is happy to show himself as leader when there is good news but less happy when the news isn’t so good – this must be addressed.”