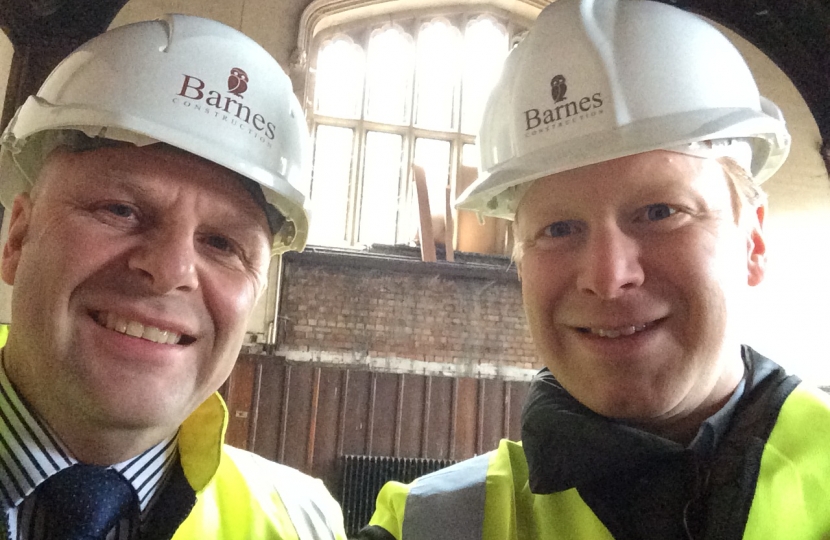 I had a treat two weeks ago.  Mark Hart of Barnes Construction took me on a tour of County Hall, where his company are putting the finishing touches to some very good affordable accommodation in St Andrew’s House, round the back.

Now, I remember the back of this building well.  It provides one of the earliest memories of Ipswich for me, as I remember sitting in the car in the car park listening to story tapes whilst my father was inside having meetings with county councillors and officials.  However imposing the front, it belies the scale of the building, which is only really one room and a corridor deep, with a particularly hideous early 1980s extension grafted onto the back.  I remember studying the fake castellation out of the window from my bolster seat, willing my father to come back so we could go home.

That was not that long ago, really, but it might as well have been an age if you were to see the building now.  It is long past derelict, almost to the point of falling down.  Squatters, a fire and open roofs mean that there are large parts of the building where you cannot safely walk and even if you climb the ladder into the high up little clocktower on the corner of St Helen’s and Bond streets, you will see the broken faces and the absence of hands, which were long-since broken away.

What is also striking is just how poorly suited the building is for running a local authority, being all narrow corridors, steps up and steps down, small rooms and converted courts.  That was the reason Bryony Rudkin, who was then Labour leader of Suffolk County Council, struck a deal to move the council to the recently vacated Endeavour House – an astute move that gave the county the modern accommodation it desperately required.

What has not gone well is the life of this building ever since.  More important for what has happened there than how it looks, it provides an unhappy footnote in our nation’s history – the last public hanging in Suffolk and the place where Wallis Simpson was granted her divorce.  You can feel the bad karma even now – with cells for the condemned in the bowels of the building, almost emanating their sad histories around what lies above.

I find it hard to love, as you will tell, but it is part of the fabric of the town and with some money, would provide the venue for some far happier occasions.  For this is the plan of Suffolk County Council and the developer: by moving the county’s Register Office into the fine former council chamber, thereby creating a dignified and beautiful place to conduct civil marriage ceremonies.  The entrance hall would in turn provide a more decorous space to register births and deaths, while the large rooms around would be good for hosting wedding receptions.  The rest of the building, meanwhile, could be converted with some effort to good houses overlooking the courtyard where I sat, bored, thirty years ago.

This is not some pipe dream, as the transformation has already begun.  St Andrew’s House has been transformed into extremely nice flats by Barnes on behalf of Iceni Homes – the top ones would command high prices were they sold as penthouse flats.  It is another part of the town that is finding its renaissance, as – bit by bit – we put right the damage and dereliction done to the town over many decades.